Losing My Shirts--along with my mind.

The expression: losing my shirt, tends to mean losing money, like on a deal gone bad, a failed venture. The STOCK MARKET!

That’s one way to lose your shirt. I have recently lived through another way. And not just one shirt. TWO!

From a dry cleaner!

But allow me to backtrack. I write for the East Hampton Star occasionally, and my columns have turned into books—shameless promotion of first book here: 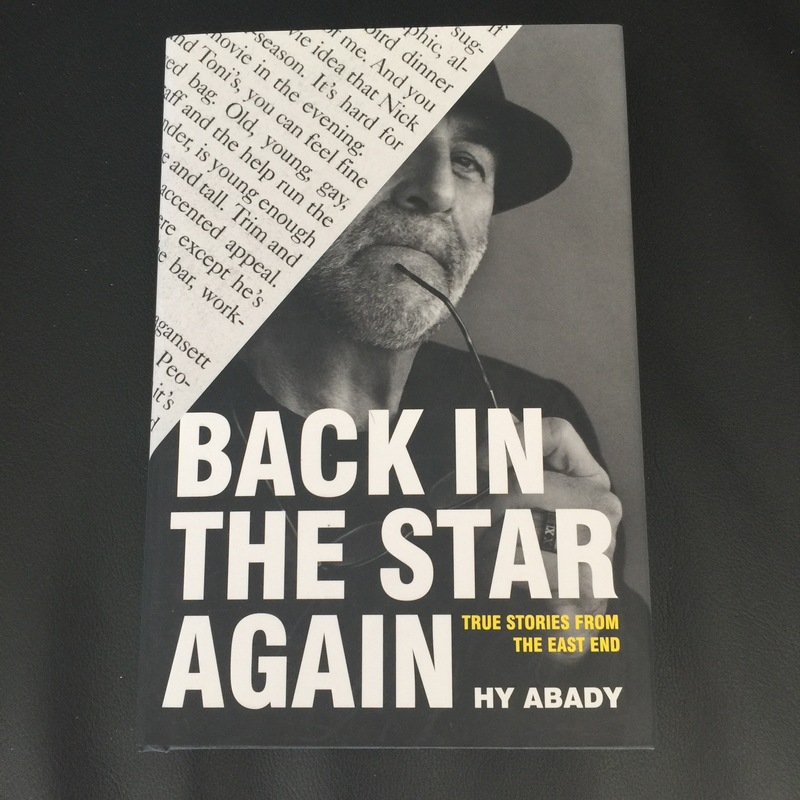 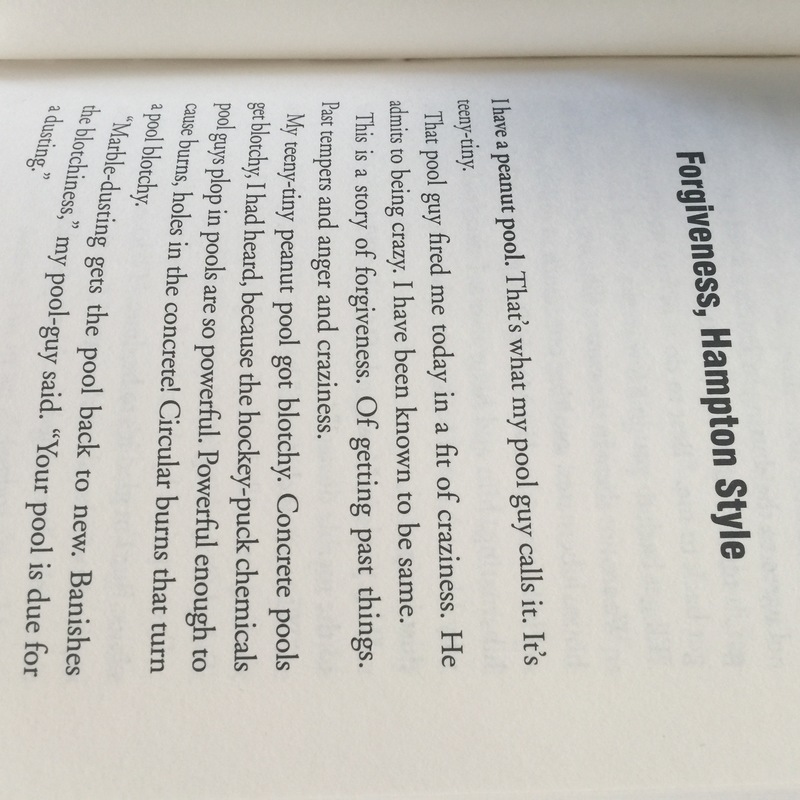 I reference this story called “Forgiveness: Hamptons Style” because is about a fight I had with my pool guy that exploded into quick anger on both our parts. We made up just as quickly. His wife tells him that he had a screwed-up and quick-trigger temper. My almost-husband says: “You can be an angry guy, Hy.”

(Read the story. Get the book.)

I thought I had learned something about my anger over the silliest, stupidest things, but I guess not.

For years, we’ve used the same dry cleaner/laundry a block from where we live in the West Village. We drop off our canvas bag of shirts and sweaters and pants,, and they deliver it, days later, to the front desk of our apartment house where they slip it into a package room.

I’m a bit of a fuss-budget (hate that expression) when it comes to what I drop off. I save the receipts where Maria, the woman I hand over the goods to, computerizes a careful list of items placed in her care. She’ll write: Blue Ralph Lauren, Striped Prada, Checked agnes b…(get it? This is a higher end of shirts and shit.)

Last week, two shirts did not return with the rest of what we had dropped off. Not just any two shirts, two of my favorite shirts because they fit me well and I liked the colors. One was the thinnest of thin-whale corduroy, deep navy blue, with white buttons and the softest feel. I bought it in a specialty shop in the Hampton town of Amagansett, a wonderful store of carefully chosen items, this shirt among them.

(ps: the shop is now gone. Along with the shirt.) 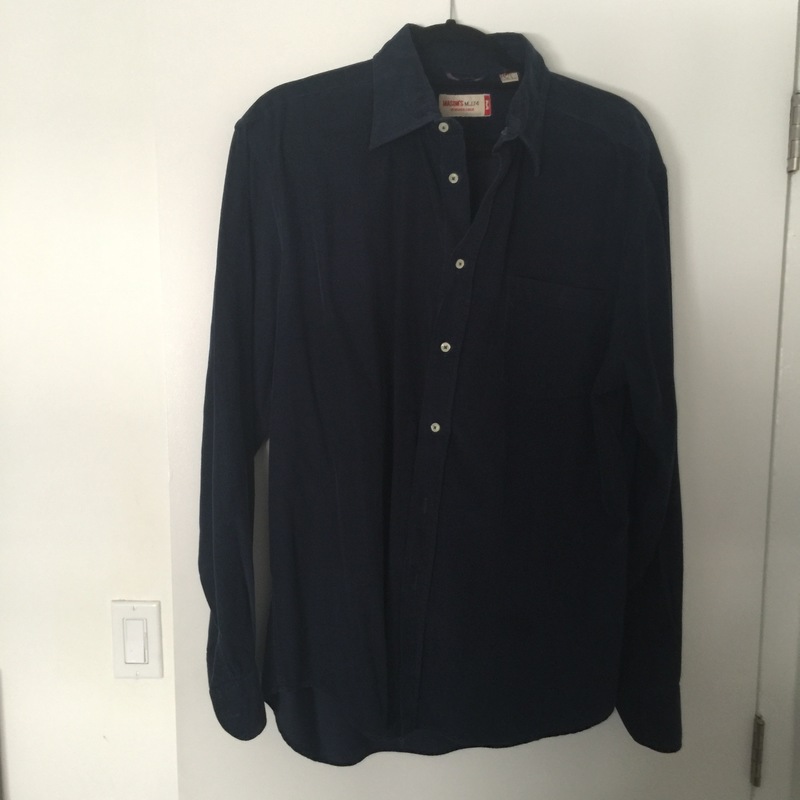 The other one was lavender. I know, I know, lavender, on a guy, is a tough color to wear. But I can pull it off, being gay and all. I love that color on me.

I have another lavender shirt, purchased 13 years ago at Century 21, but it’s tight and it’s got some pale smudges that will never come out in the wash, and the color is somewhat darker. Not as vivid.

This un-lost lavender one is corduroy, too. I wear it often as a knockaround garment.

The lavender linen was decidedly more dress-up. Very chic, and from St. Bart’s, no less. This particular shirt is one of the very reasons I look so forward to summer so I can wear it. (Well, I tend to exaggerate.) 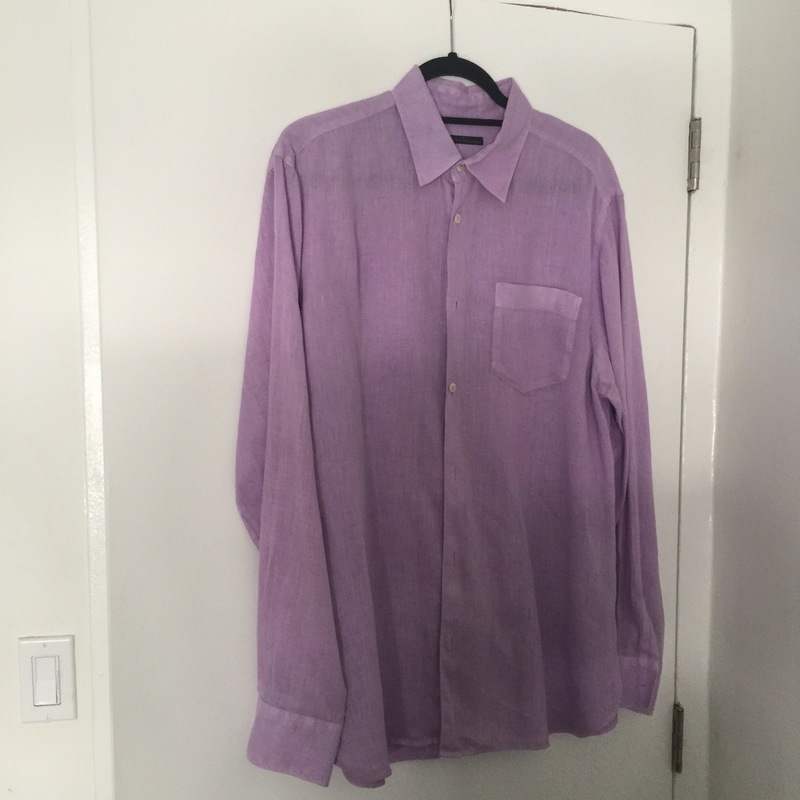 I go down to the package room where all the deliveries are kept. 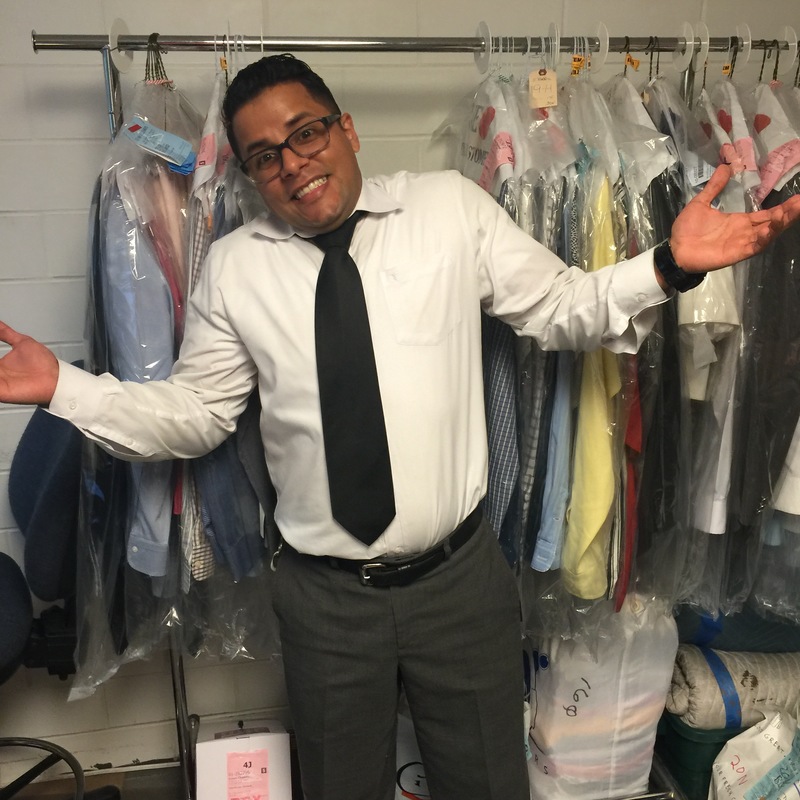 I ask the doorman and he tells me they had already delivered shirts just the other day.

“Yes,” I say, starting to be concerned. “Every shirt but two.

I didn’t need to tell Teddy (the doorman) how close I was to these two particular pieces of material. Would he even understand?

(Teddy likes me. I tip well at Christmas and other times, too. I like Teddy, too. He’s good-looking and well-mannered and likes to chat. But just enough. 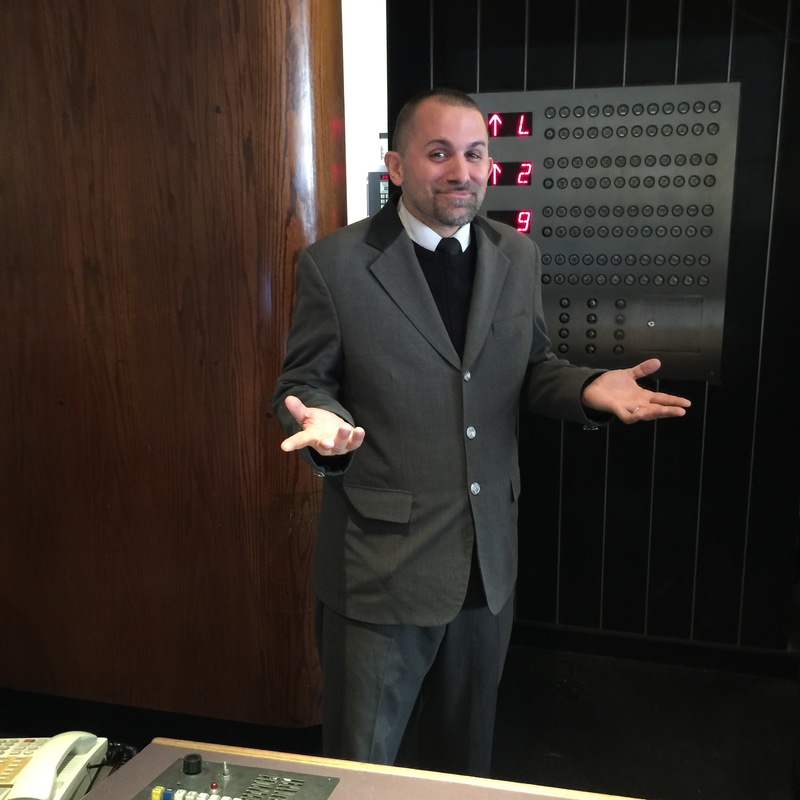 I go to the dry cleaners, start to boil a bit. And as I got closer, boil even more.

I storm in: “Where are my goddamned shirts?!”

She recognizes me and tells me all my shirts were delivered days ago.

“But not two of my favorites. The navy blue and the lavender?!”

“They are missing. They are fucking missing,” I say, no sneer, and there I am again, the monster with the pool guy that I had told myself after that incident (again, read the story, get the book) I told myself I would never be.

And it goes even further downhill. A week passes. No shirts. I pass each morning to the place with threats: “You will pay $600 for these shirts!”

(I don’t think I paid more than $400 for the two.) “I may as well just throw my clothes in the garbage can!” each epithet, every day, more seething.

Maria’s ultimate response for the misshap was that there was another delivery to our building, to 17-C (we’re 11-C, if you’re paying close attention) and she was trying to reach the couple in that apartment to see if they accidentally had the shirts. The doorman got into the act, too, and kept at the guy in 17-C. The guy kept saying no, ultimately pissed, but then remembered that his wife, away on a trip, had some stuff sent from the cleaners, too, and she just tossed her stuff in her closet before she left.

While this latest exchange between Teddy and 17-C was going on, I was starting to think: what would life be like without these articles of clothing? These two shirts I’ve owned for years.

Not so terrible, I finally determined eight days of loss later. Almost like the idea of a stray sock, lost after a washing and a drying.

And I have so many shirts! 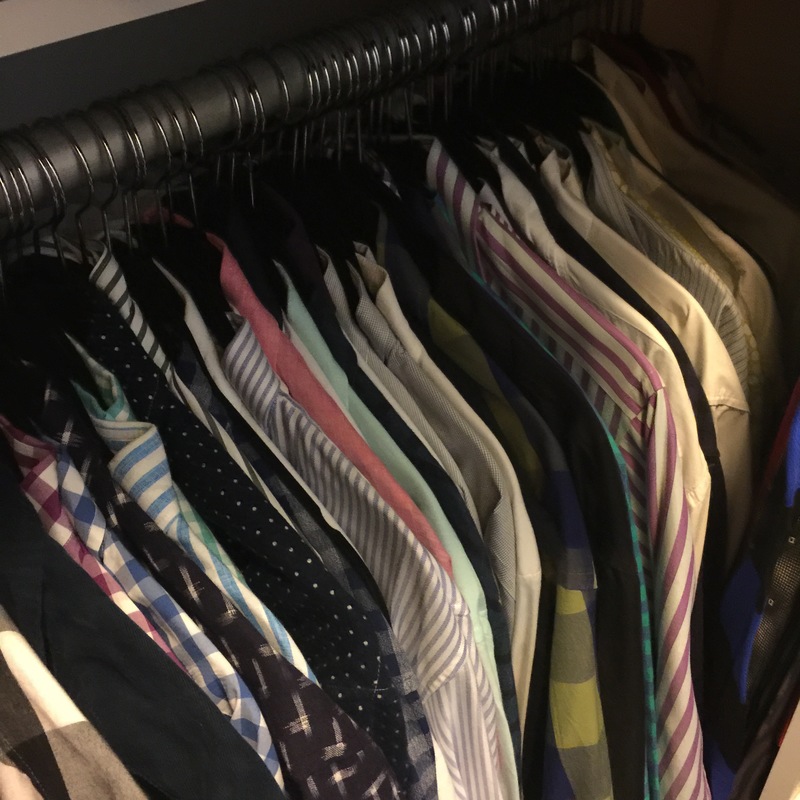 But I resented the idea that you just hand over your stuff, pay for it, and it disappears.

David, the about-to-be-husband, said throughout: “It will show up.”

And so, it did show up—I looked at them in their filmy plastic bags with the mistaken 17-C tag pinned to it along with that tenant’s name.

Maria called to tell me they were on their way, as they were already hanging on my closet doorknob. I felt like a real dickhead, so very angry over…what? Being mistreated mostly. Victimized in the most minute way over something so very meaningless.

But there can be no doubt: I showed an anger throughout that surprised even myself. (Some.)

The shirts are now in the closet, one of which I won’t wear until at least May, 2016. My spirits are in the basement—how could I get so angry? I thought I learned something from the pool guy! Oh, and just for some sexy reference…THE POOL! 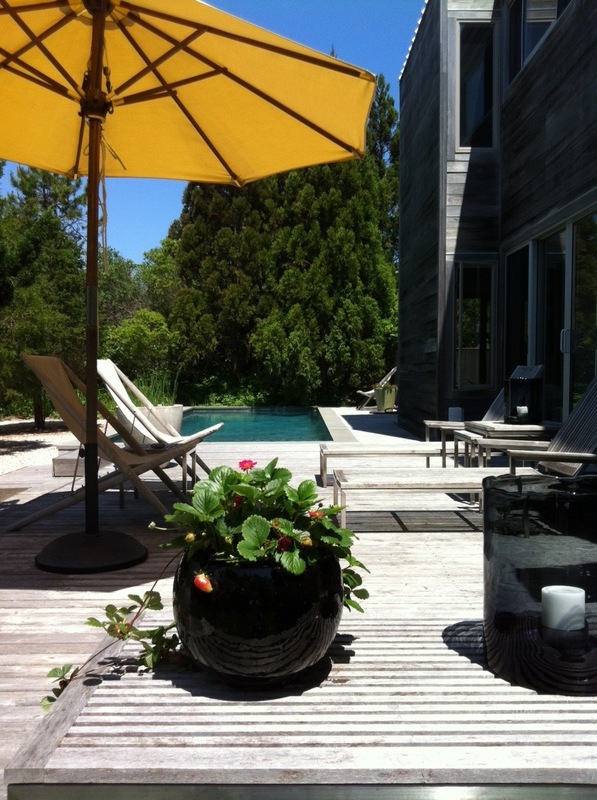 After a little while, I called Maria back and apologized. I told her how sorry I was for being so rude, and “apologize for me, too, to the tailor” a woman who sat in the same room in front of the racks and racks of plastic-wrapped clothes. With tags on them. Names. Apartment numbers. Hoping to find their rightful closets and drawers.

Maria actually apologized too, but only because she’s a nice, sweet person and not a person like me who loses his mind from time to time.

Haven’t I learned anything from the pool guy?

Will I please try to learn something from the dry cleaning lady?!

I just wanted to vent and get these shirts off my chest.

In 2012, the first day of summer in fact, I was forced into retirement. Thing...

I wrestled with calling this piece: “My Un-Hamptons Summer” and even considered it as a sub-title, but thought...